Magi: The Labyrinth of Magic 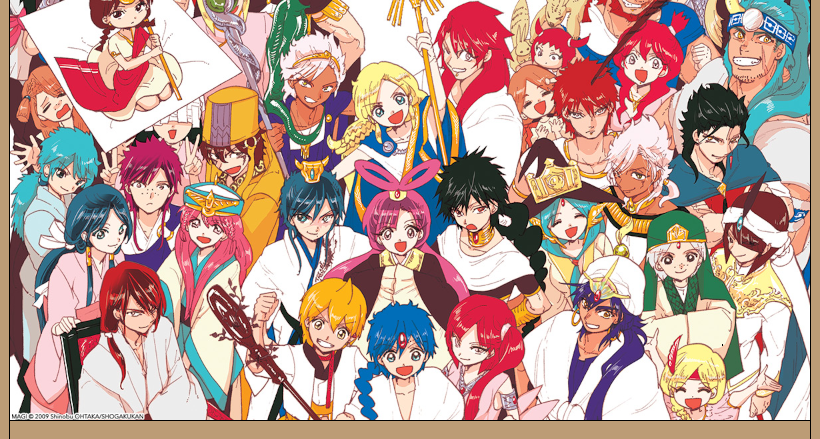 Webmaster
Hi! I am Hely, the person running this website. I wanted to capture a bit of old-timey, Internet 1.0, early 2000s vibe with this website. I used to run these kinds of anime websites when I was a teenager. It was a fun hobby, and now, many years later I wanted to return to that. The site is hosted on neocities.org, which I think is the perfect site for this purpose as their will is to be a place for 2000s vibe websites. (RIP to all of my sites inaccessible on webs.com.)

I've always had a lot of admiration for the hardcore fans of series such as the Lord of the Rings or Star Wars. They are very devoted to the series and have managed to build amazing websites, resources, wikis, etc. Unfortunately for me, I am not really interested in those series or many series with such big fandoms anyways. Magi is a weird case I think... I don't even think it's some kind of a masterpiece of a manga but for some reason, I just like it very, very much. So stupidly, I decided to approach Magi with that similar kind of devotion. I only got into the series in 2017, which is relatively late, so from that perspective it's also a bit weird. Magi is very special to me as it has managed to get me back into hobbies I had already abandoned, such as drawing, and get me to pick up new ones, like writing fanfiction. I also haven't been as involved with other people in a fandom since... 2012? Although I have great friends in the fandom, fact of the matter is that it's still so niche nowadays because most people have moved onto new fandoms.

If there were more Magi fans of that enthusiastic strand as found from the fandoms I listed earlier, it would be great to, for example, have a self-hosted website with an independent wiki and all. Unfortunately, I don't really see much that kind of support myself, not being able to pay for such a thing alone. So maybe I am not able to pay for something like that on my own, but I am able to pay for this website. Therefore, I wish that with this project, I would be able to create an interesting site, archiving Magi and the fandom history in a way that matches up to the aforementioned fandoms and something like Harry Potter, et cetera. The hosting costs as well as the domain are about €85 per year, to be fully transparent.

Something about me personally, I am enthusiastic about languages (English not being my native language, to explain any possible grammar mistakes found on this site). I also have a conlang hobby, that is, I have made my own fictional language. My goal is to one day be able to translate my favourite book, the Epic of Gilgamesh, into this language.

If you want to contact me, it is possible via email rennhakuryuu[at]hotmail.com. Please note that I might not check the email for many months. I was asked if there was a possibility to donate, so I made a Paypal link. If you want to help with the hosting and domain costs (~€85 per year as I said), you can do so by donating any amount you wish here.