Manga
The first scene when Hakuryuu is introduced, and when Judar's name is revealed for the first time, it is made very clear that Judar prefers Hakuryuu over Koutoku and that he would like to take him to a dungeon. And that he's been suggesting it for some time. Hakuryuu isn't really okay with that idea for now.


(As a complete side note, it's kind of funny/interesting to me that Judar is introduced eating a peach, and there is also one next to him that he has only taken one bite of. In ancient Chinese literature, "bitten peach" meant homosexuality. And Kou is of course based off of ancient China.) 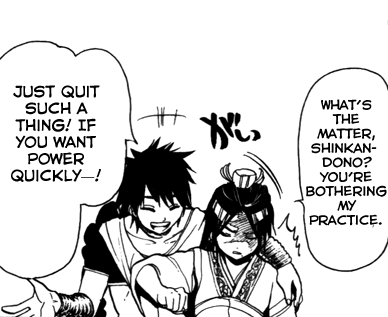 In Zagan's dungeon, Ithnan asks if Dunya is able to not to harm Hakuryuu as he is one of Judar's favourites.

When the two finally team up, Judar drops everyone else and shows a surprising amout (absolute) of loyalty towards his new king. Hakuryuu only plans on using Judar's power and not being his friend. 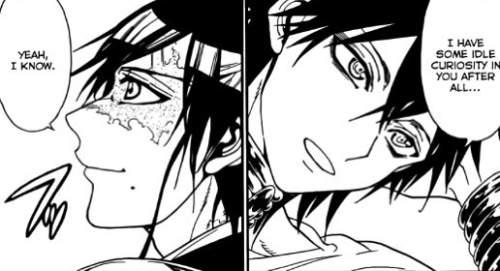 Then above scene happens.

The two think that they are only ones who can understand each other, the feeling they feel towards revenge and depravity. This is how you get lines like "Have you always understood me so well?" "I told you we're the same!"

Judar is absolutely enraged when it turns out Kouen has put a spell on Hakuryuu with Phenex. And absolutely stunned when Hakuryuu is able to move on with it.

When Judar gets blasted to space, Hakuryuu is heartbroken and this proves that he had moved way past of ~using~ Judar. He says that losing limbs is one thing, but he never thought he would lose Judar. When somebody brings up Judar's death, Hakuryuu reacts with either sadness (to Sinbad) or anger (to Aladdin). Hakuryuu became visibly agitated when Aladdin reminded him that Judar wasn't around anymore by saying that he can't imagine how Hakuryuu will live going onwards, with Judar gone and his revenge completed.

Meanwhile in space, Judar is a bit sad but convinced that Hakuryuu was going to go on even without him.

Judar stop praising Hakuryuu to high heavens challenge (impossible). Judar remembers to point it out to Alibaba multiple times that he is no match for Hakuryuu and is nothing compared to him.

People will bring up the fact that Hakuryuu actually let Judar in his bedroom when he was recovering.

While separated, Hakuryuu won't stop wondering out loud what Judar is doing, and vice versa.

Hakuryuu keeps telling Aladdin that Judar would be able to do transfer magic better than him, while knowing full well that he actually couldn't.

As soon as they can, both go looking for each other. Eventually they meet in Judar's home village, where Hakuryuu gets to learn Judar's real name... which Judar won't agree to reveal to anyone else.

Chapter 314 is known as the engagement chapter of the main couple, but Juhaku fans were also technically thrown a bone by one of the editors who wrote in the side of the final page: "Even while some people are getting married, others remain single. The night of the banquet has passed... but it's fine! Hakuryuu still has Judar!"
Despite everything that happened, Judar has a positive outlook on life. He tells Baal-Sinbad that he's content with his life as wrecking havoc with Hakuryuu has been so much fun.

Judar doesn't have a good memory, but he says he has Hakuryuu to remember the details for him.